Stories from the life of the McCabe Educational Trust

Many of our pilgrims to the Holy Land will have met with Hosam Naoum at St George’s Cathedral in Jerusalem.  After years studying Theology in the USA, this 48-year-old Palestinian Anglican (almost a contradiction in terms) served in parishes in Nablus and Zababdeh.  He was Canon Pastor at St George’s Cathedral, Jerusalem, from 2005, becoming Dean in 2012.  Last Ascension Day he became the Most Revd Hosam Naoum, Anglican Archbishop in Jerusalem.  The photograph shows Hosam with his family outside the Cathedral after the ceremony.

A few days later the new Archbishop issued a Statement on the eruption of violence throughout the Holy Land.  Here are excerpts:

“We have seen the rapid escalation of violence throughout the Holy Land: in the air attacks launched against Gaza and Central Israel, in the rioting between extremists in ethnically mixed cities, and in the continuing conflicts between protesters and police over the pending evictions in the Sheikh Jarrah neighbourhood, of which Saint George’s Cathedral is a part. It is particularly disheartening that this violence erupted out of police disrespect of Muslim sacred sites and traditions in Jerusalem during the various religious feasts.

“We know from sad experience that violence and hatred will never lead to solutions to the deep ethnic and religious divisions that have afflicted this region now for a century. We therefore call upon the authorities on both sides to agree to an immediate ceasefire in the Gaza conflict in order to end the rain of death and destruction that has had tragic consequences for thousands of individuals and families.

“We also call on Israeli authorities to restore order and calm within the ethnically mixed cities where rioting has broken out, so that the human and civil rights of all are protected equally.

Finally, we call upon the United Nations and the international community to work with all parties to seriously address the underlying injustices and grievances that have led to this latest unrest in a recurring cycle of violence, working for a just and lasting peace between Palestinians and Israelis that incorporates a viable Two-State Solution.

“In the meantime, the Episcopal Diocese of Jerusalem is continuing its Christian mission of bringing healing to the wounded, relief to those who have lost their homes and livelihoods, and comfort to those who mourn the loss of loved ones.”

[The Archbishop went on to appeal for help for the Al Ahli Hospital in Gaza, which “has been on the frontlines of these relief efforts, becoming a beacon of hope to those trying to remain alive under such dire circumstances.”]

“Last of all, I ask those within the Anglican Communion and all of Christendom to join with us in offering the following prayer:

“Almighty and Everlasting God: Our days are in your hands; we lift up all those in the Holy Land who are victims of violence and injustice, that you might empower your Church to bring healing to the wounded, relief to the suffering, and comfort to those who mourn; we pray also that you would soften the hearts of all those involved in the recent conflicts, that they would be led to work for justice and lasting peace in the land where your Son, our Lord Jesus Christ, first came to bring hope and abundant life to all people; these things we ask in his Holy Name. Amen.” 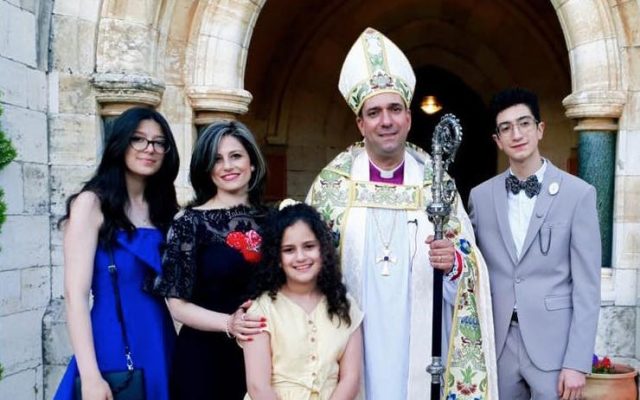