Stories present and past from the life of McCabe

RSVP is usually a request for a positive response.  In this case, it stands for REQUESTED – SOCKS, VESTS, PANTS!  And the result was that an Inverness church sent vast quantities of these – plus pyjamas – as a Christmas gift to Bethlehem.  What’s more, they were delivered free by DHL in its hitherto undiscovered role of Christmas angel.

It all started when my wife Lesley and I led a pilgrimage group to the Holy Land at the start of Lent 2018.

As we usually do, we included a visit to Al Shurooq School, which was of course founded by a Church of Scotland elder, Helen Shehadeh.

We thoroughly enjoyed our time there, and after returning home, there was a natural desire to keep in contact and to do something to help the children.  The staff at Al Shurooq had told us that there was always a need for underwear and pyjamas.

So as Christmas approached, the RSVP scheme pretty much invented itself.  This generous congregation then launched themselves at the shops of the Highland capital, and filled two huge packing cases.

Next problem – how to get it all to Bethlehem in time for Christmas, and at what cost?  Lesley and her friend Jean trawled round the various shipping companies.

Estimates ranged from £560 to over £630.  And then they dropped in on DHL’s Inverness depot; as they were explaining to the clerk that this was all about sending gifts to Bethlehem for children at Christmas, the manager overheard – and stuck his head round the door to say – “It’s OK – we’ll do it for nothing!”

It got him a round of applause in church the following Sunday – if only he’d been there to hear it!

Off went the packages, and we tracked them all the way.  When import duty of about £120 was demanded by customs in Israel, we paid it from our mission funds.  And so the request was fulfilled.  Prayers answered in a spectacular way.  RSVP – Thank God! 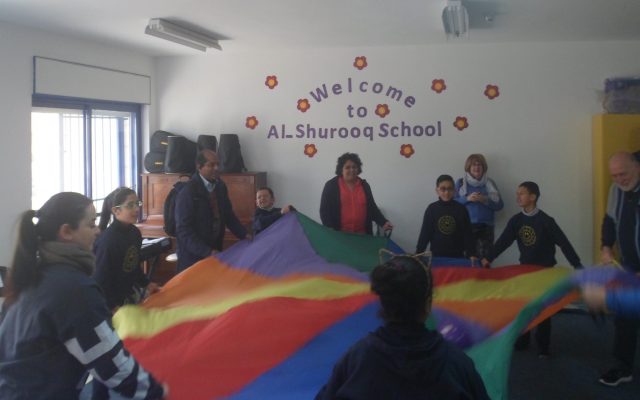